The Law Office of William J. Luse, Inc. Accident & Injury Lawyers has filed two lawsuits alleging that Horry County Schools did not adequately protect teachers and students from exposure to toxic mold. One of the suits is on behalf of a teacher, and the other is on behalf of an elementary school student.

The teacher worked at three separate schools between 2016 and 2019, where she experienced symptoms of mold exposure. She reported the mold issues to maintenance staff and the principal of St. James Elementary. The lawsuit alleges that the district neglected to make the necessary fixes to protect its classrooms.

More information about the suits is available from WMBF News: 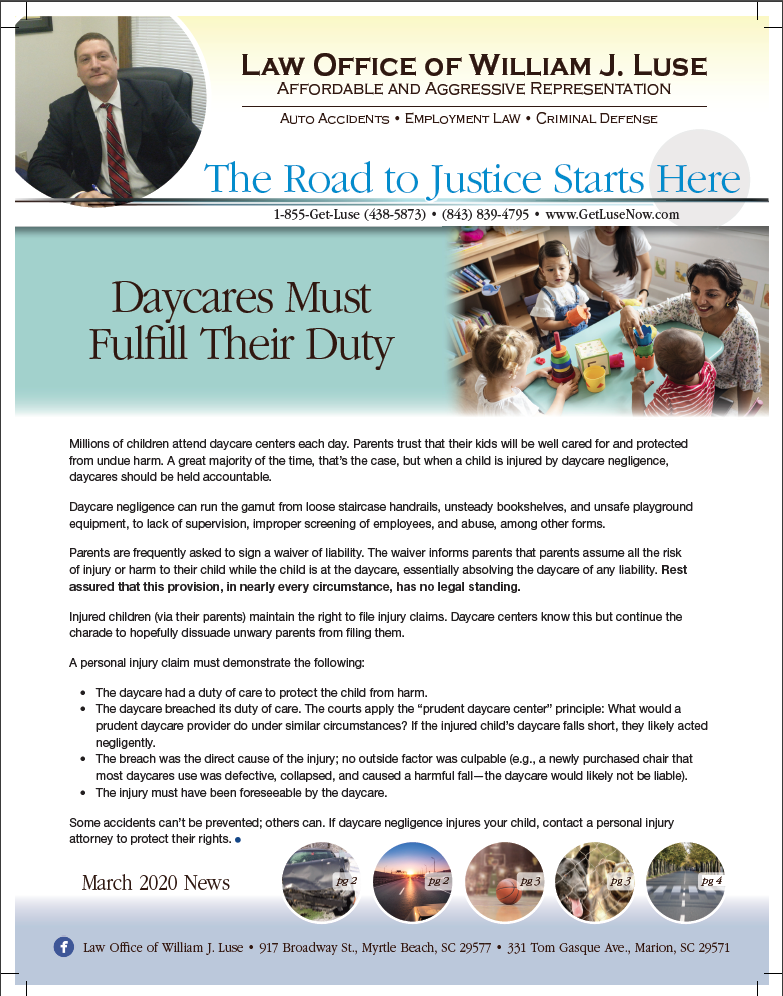 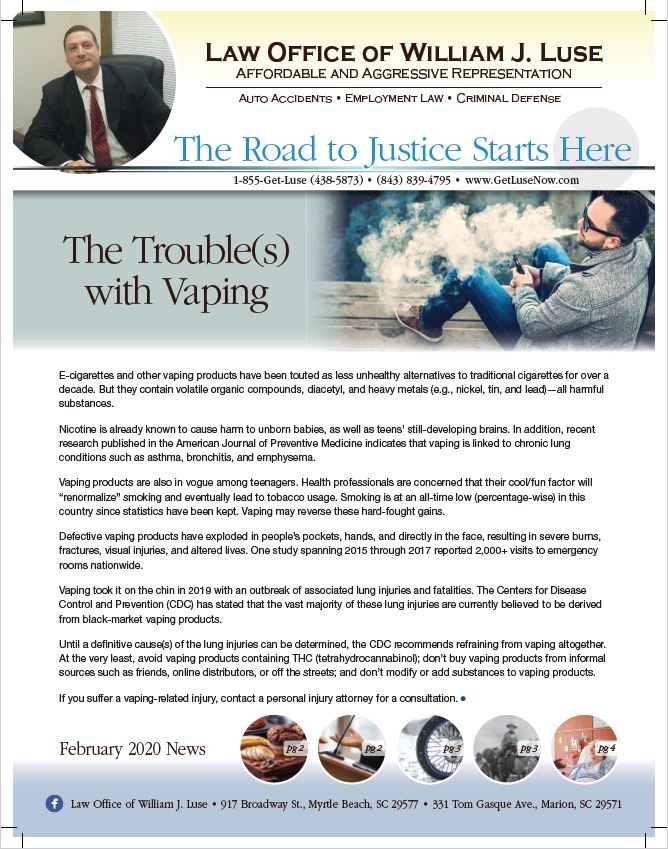 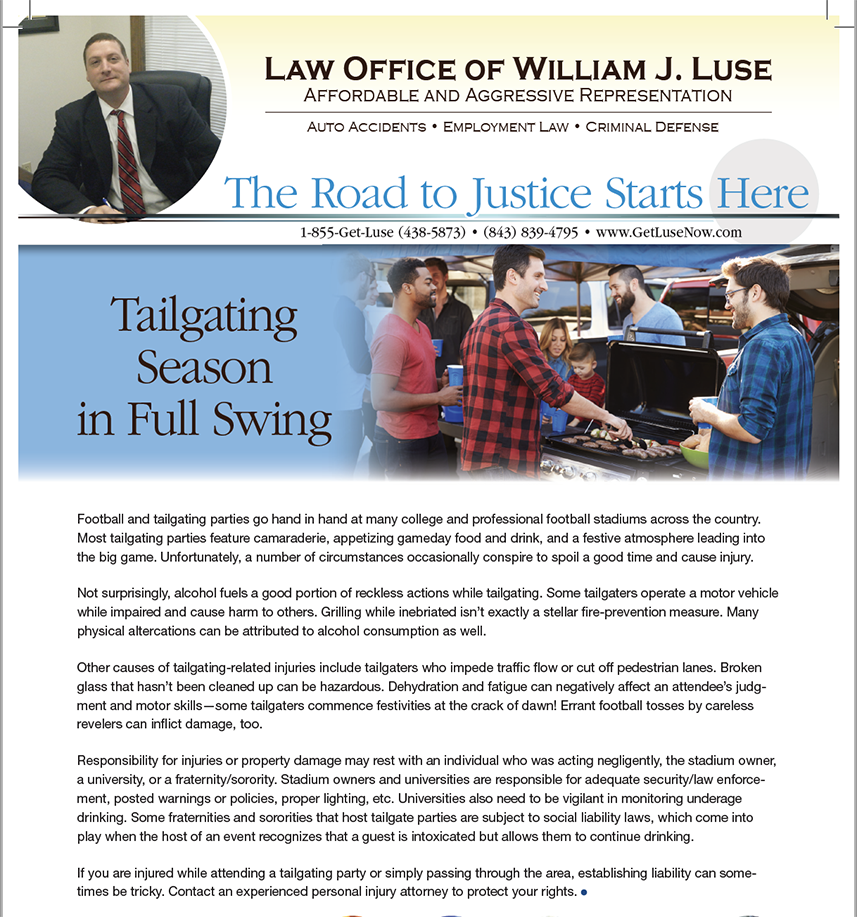 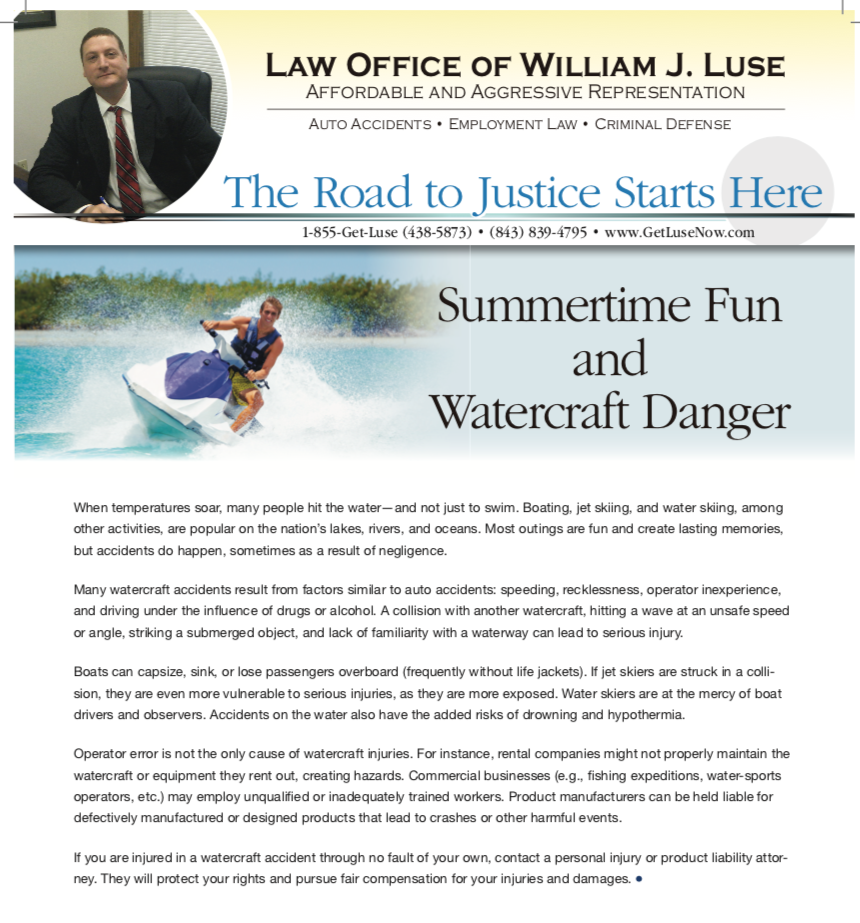 The Basics of Contingent Fees

In personal injury cases, most attorneys work on a “contingent fee” basis. In this scenario, you agree to
pay your attorney a percentage of your award if you are victorious instead of an hourly rate. There are no
up-front fees required to hire an attorney.
If your attorney wins your case, the contingent fee is typically in the range of 33–40 percent of the amount
recovered. If you lose your case, your attorney does not get paid—no award, no contingent fee. The
contingent fee frequently does not include charges for court  lings, deposing witnesses, making copies of
medical records, and so forth. Those costs will come out of the recovery amount if you are successful. If
you lose the case, you may be responsible for those charges.
There are differences in contingent-fee arrangements from attorney to attorney. One big one is whether
your attorney deducts the costs and expenses from your recovery amount before or after he/she is paid
the contingent-fee percentage. This point is often negotiable.
Some contingent-fee agreements will operate under a graduated percentage contract. Legal work that’s
more involved (e.g.,  ling a lawsuit and prepping for trial) will garner a higher contingent-fee percentage.
The contingent-fee percentage may be lower if a case is settled prior to  ling a lawsuit.
Contingent-fee arrangements eliminate up-front charges for the client; there are no mounting legal bills
as a case winds through the legal system; lower-income people are afforded greater access to the legal
system to pursue compensation for injury; and attorneys are highly motivated to win their cases…they
don’t get paid otherwise.

Dental plaque found in ancient Neanderthal remains in El Sidrón Cave, Spain, has provided
further insights into our nearest relatives’ behavior, diet, and knowledge of medicinal plants.
Dental plaque can trap microorganisms that live in the mouth, food particles, and pathogens
found in the gastrointestinal and respiratory tracts, preserving DNA for thousands of
years.
The Neanderthal whose remains were studied displayed evidence of a dental abscess, as
could be seen through observation of the fossilized jawbone. Remnants of an intestinal
parasite that causes severe diarrhea were evident as well. However, poplar, which contains
salicylic acid (a painkiller), and antibiotic mold (Penicillium) were also found in this ill
Neanderthal’s system. This finding seems to indicate that Neanderthals had knowledge of the medicinal qualities of plants. The
use of antibiotics predates the development of penicillin by 40,000 years.
When you combine this new information with other findings, Neanderthals appear to have been much more sophisticated than
we modern humans have given them credit for. They also decorated their abodes with cave art, buried their dead, and evidence
points to them being the first jewelers. Yes, they may have engaged in cannibalism, too, but no one’s perfect.
A little dental plaque can go a long way, providing a window into the Neanderthal lifestyle—their diet, health, and environmental
influences on their behavior. In addition, the evolution of oral microorganisms can be charted, and there’s been notable change
from ancient Neanderthals to modern humans. Something to think about the next time you’re snacking.

If you’ve been injured in an auto accident due to the negligence
of another driver, and your injuries prevent you from
working or reduce your ability to work, you have a right
to recover lost wages. Generally, to recover for lost wages, one of two things must occur: An
injury must be the direct result of the accident, or a pre-existing injury was made worse by the
accident.
To prove lost wages, produce the pay stub from your most recent paycheck prior to your
injury. Tips and non-salary benefits should be included as well. If you are self-employed, you
will need to submit proof of what you would have earned. Keeping detailed, organized records
pays off in these circumstances.
If a motor vehicle accident results in a long-lasting or permanent injury—including chronic pain
or fatigue—that will affect your ability to earn a paycheck, you may have grounds to recover for
“lost earning capacity.” In some situations, you can claim this even if you can work—for instance, if
the injury reroutes you to a lower-paying job.
Proving lost earning capacity can be tricky, as it involves some speculation about the future. At trial, a
financial expert will likely be necessary to crunch the numbers. Your character traits, work habits, education,
and intention to change careers may also be considered. After that, it’s in the hands of a jury, which has
the leeway to determine the final amount you are awarded.
If you have been injured in an auto accident, contact an auto accident attorney to protect your rights.

We’ll grant them this: insurance companies are great marketers, and they are very good at promoting a caring, sensitive
approach when it comes to handling your claims. Don’t be fooled, though.
Insurance companies and their representatives have one goal in mind: to make big profits. And, how do they strive to do
that? By limiting the amount of money that they pay out on accident claims or by denying those claims altogether.
Here are just a few of the most common tricks and tactics that insurance companies utilize to achieve their goal:
• Monitoring your social media postings and interactions. Rest assured that the insurance company will be checking
for any videos or updates you post that might undermine your claim;
• Doing their best to try to get you to go through the other driver’s insurance company to get your vehicle appraised
or fixed;
• Believe it or not, insurance companies have even made a habit of hiring private investigators to secretly videotape
unsuspecting accident victims, hoping to uncover damaging information;
• Trying to talk you out of meeting with or hiring an experienced car accident attorney to help you with your claim.
The insurance companies know that accident victims who hire an attorney have a much better chance at achieving
a higher settlement for their claim;
• Not settling claims for a fair amount. Unfortunately, we see this all of the time, and it can spell financial disaster for
you and your family down the road.
An experienced car accident attorney can help level the playing field and protect your rights in a fight against the insurance
company.